Each fall, the university recognizes faculty who have made a national and international impact through their research, teaching and service, by inducting new members into the Scroll and Quill Society. What started as two different prestigious faculty clubs in the 1980s is now a recognition program for faculty of all disciplines.

“This society is a chance to celebrate imaginative creative works, scholarly research and the service our faculty provide to better our community,” says Jana L. Jasinski, vice provost of Faculty Excellence.

Haiyan Bai has over 40 refereed journal articles in her field of methodology, measurement and analysis. She has improved quantitative data collection across all disciplines, by taking a closer look and improving propensity score methods with resampling techniques to reduce selection bias with non-random samples. She is a leader in her field of methodology with 40 publications, three books and 102 refereed professional presentations.

Christopher Blackwell is an expert on LGBTQ health, and studies health and social disparities among high-risk and vulnerable populations. He has 37 peer-reviewed articles and written five book chapters. Blackwell was among the first nurses to professionally discuss unethical uses of sexual orientation conversion therapies and established clinical guidelines surrounding a comprehensive anorectal carcinoma screening program. He’s also been inducted as a fellow into the American Academy of Nursing.

Cheryl Briggs is an animator who specializes in animation production. Briggs has written three books featuring her students and animation productions since she started at UCF in 2009. Her students have produced animated films that have won awards and been screened at hundreds of film and animation festivals worldwide, showcasing UCF to national and international audiences. Animation studios such as PIXAR, Disney and Dreamworks and others employ UCF graduates thanks to Briggs’ expertise and teaching.

Necati Catbas is one of the most recognized authors in structural engineering systems, which include bridges and structural monitoring and identification. He has over 90 journal articles, 215 conference paper and presentations, edited four books, written 13 book chapters and completed 34 reports. He also secured over $6 million in research awards. Through his research he has helped improve infrastructure performance, including advancing the security of bridges, buildings and stadiums.

Ilenia Colón Mendoza studies 17th century Spanish art, with a focus on pageantry, theater and the connection between art and literature. She has also recently studied the Puerto Rican artist, Jose Campeche. She has lectured at the National Gallery of Art in Washington D.C., and the Museo Nacional de Escultura in Valladolid, Spain, while also serving as consultant to curatorial projects on polychrome sculpture at the Indianapolis Museum of Art, and the National Gallery in London. She has published two books, two book chapters and three journal articles.

Stephen Fiore researches how technology affects human performance. Although he is in the department of Philosophy, his work crosses many disciplines including computer science and psychology.  In his 22 years at UCF, he has co-authored 58 peer-reviewed journal articles, 111 peer-reviewed conference proceedings, 50 peer-reviewed book chapters, four co-edited scholarly volumes and one co-authored book. He also has been published in top journals Nature Human Behavior and the oldest scholarly journal in the word, Philosophical Transactions of the Royal Society.

Stephen Kuebler, who is also the founding associate director of the UCF Center for Ethics, researches chemistry, materials and applications of a method for laser-based nan-scale 3D printing called “multi-photon lithography”. MPL is used to create sensors and micro-machines. He’s known for engaging his students in research at all levels of their academic careers. Kuebler has published 42 peer-reviewed papers, three book chapters and holds five patents/provisional patents.

Lisa Mills produces documentary films exploring the hidden histories of people. She is an independent film maker whose work crosses many facets including story development, research, writing and production. Students work with her on films and in turn, build their portfolios. Her documentaries have won 37 awards, 20 of which are international, and have been screened in 54 festivals.

Marshall Schminke researches business ethics and how leadership, gender and organizational performance affect ethical decision making. He’s explored topics such as employee deviance, abusive supervision and the impact of unethical coworkers on employee ethics. His latest research is on well-being at work. His publication rate in the top journals in his field in the last five years places him in the top one percent of the Academy of Management.

Gergana Vitanova studies language learning and teaching. She analyzes second-language teacher’s identity and how other factors such as gender, race and sexuality intersect. Her research crosses both the linguistics field and social sciences. Her latest research is exploring the world of gaming and how it can be used to teach second languages. Vitanova has published a book and co-edited two volumes with international publishers.

Scott Warfield specializes in music history, focusing on music from the 1960s to present day. He is one of the first scholars to study rock musicals, and the work of composer Richard Strauss. One of his published essays was the scholarly article which defined the term “rock musical” for the first time. Since joining UCF, he has published 21 articles and two dozen encyclopedia articles. 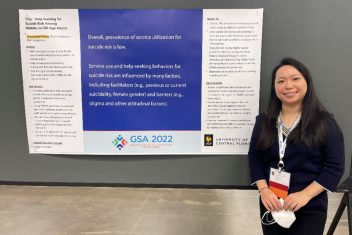 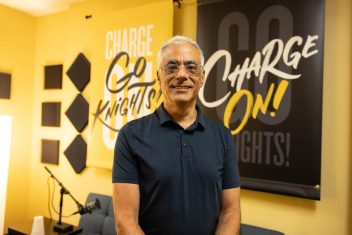 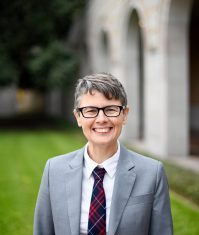